Ciao from Italia!The day of travel started quite well when I had to wake Isobel earlier than normal. I tried a gentle approach rather than a grab from cot and trying to keep her asleep. So I turned on a light in the hall, and gently told her we were going on holidays. She slowly arose from slumber, got her dressed and we were off, with everything plus the kitchen sink!!The taxi to airport was interesting as in this country if the taxi doesnt provide a baby car seat you are legally allowed carry them on your lap. Isobel loved this as she had finally a proper chance to look around and take everything in.We flew from Terminal 3 in Heathrow, and I spent about an hour trying to find boiling water to prepare a bottle! I don’t know how families travel and formula feed, I admit I never knew how hard the logistics of it could be. The family room was a disgrace and I went on a bit of a rant on Twitter about it. I tried to breastfeed Isobel there as she was so distracted by everything going on around her, but no luck as a big mirror was directly behind us and her reflection was much more interesting.So after all this drama had passed it was time to get on the flight. While waiting to board I tried to make up a bottle with water I had got from a cafe. I brough a flask with me to store water, and I am now thinking it is probably the most useful thing I packed.So when the bottle finally cooled on flight I managed to get first feed into Isobel, halfway through she fell asleep. She was nearly 4 hours awake at this stage as I only managed a 10 minute nap in the terminal. She only slept 30 minutes as a toddler in front of us had a bit of a meltdown because he could’nt sleep. Thankfully it seemed to be enough to keep her happy, and a few small toys I had with me kept her entertained for the rest of the way.We had a car booked from Pisa, but the car seat was not isofix so took a bit of wrangling to get it to feel someway secure. Finally we were off on our adventure of touring Tuscany. We had lunch in Pisa, I had brought a few snacks with me for Isobel from home just in case we couldn’t find food she would/could eat. The plan after was to walk around Pisa, take in the sights and let Isobel get her lunch nap in the buggy. Unfortunately it just downpoured for the next few hours so instead we headed to our next destination of Livorno. The leaning tower from the car is all we saw of Pisa (only got this close as we went down a wrong road!). 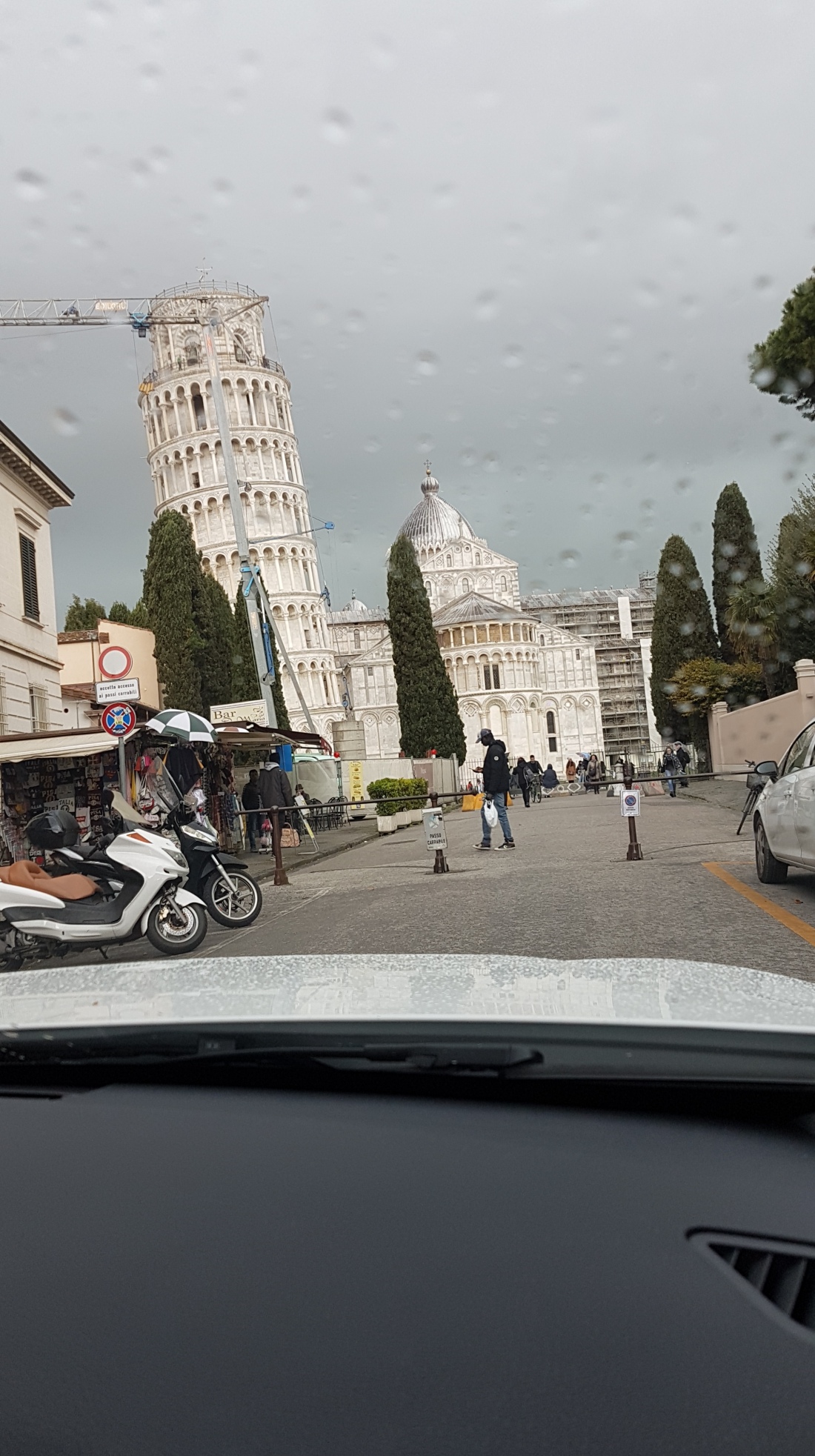 Luckily Isobel slept a little in the car and only for a monster shitty nappy probably would have slept longer. I was a bit too eager with the veg the evening before. We got to the hotel and camped there for a few hours as we waiting for the rain to stop. I got a nap while my hubbie entertained Isobel by watching the lift in the lobby.We decided to try and get Isobel to sleep in buggy before we went out for dinner and hoped we could transfer her easily to the travel cot when we got back. This was another disaster. For starters most restaurants here don’t open until 7pm, so we spent an hour walking around getting Isobel to sleep first. Then when we got to the restaurant we realised we had somehow lost an hour of time! (It was now 8pm). How that happened we still don’t know, but never leave your phones to automatically update your time. Even though I had changed my watch I wasn’t really paying attention to it!So Isobel didn’t sleep through dinner, another bad nappy disturbed her, so we let her stay up until we finished dinner. I stupidly thought we could keep her routine a little looser on holidays, how wrong I was!When we got back to the hotel it took nearly another 2 hours to settle her back to sleep, I tried everything boob/bottle/cuddling. Nothing worked she just wanted to play. She spent about an hour just banging her hands against the side of the cot as she loved the noise it made. I gave up, let her play and thought she will eventually settle, and she did.It then took nearly another hour for me to sleep as some idiot in the hotel thought it was a great idea to have a phone conversation right outside my room. After hearing all their plans for nearly an hour I cleared her, explaining my little baby needed her sleep. Sometimes it’s great using the baby as an excuse!I am hoping for a more structured routine today, and hopefully better naps (and that’s just for me).Continue to follow us on our Italian adventure.. 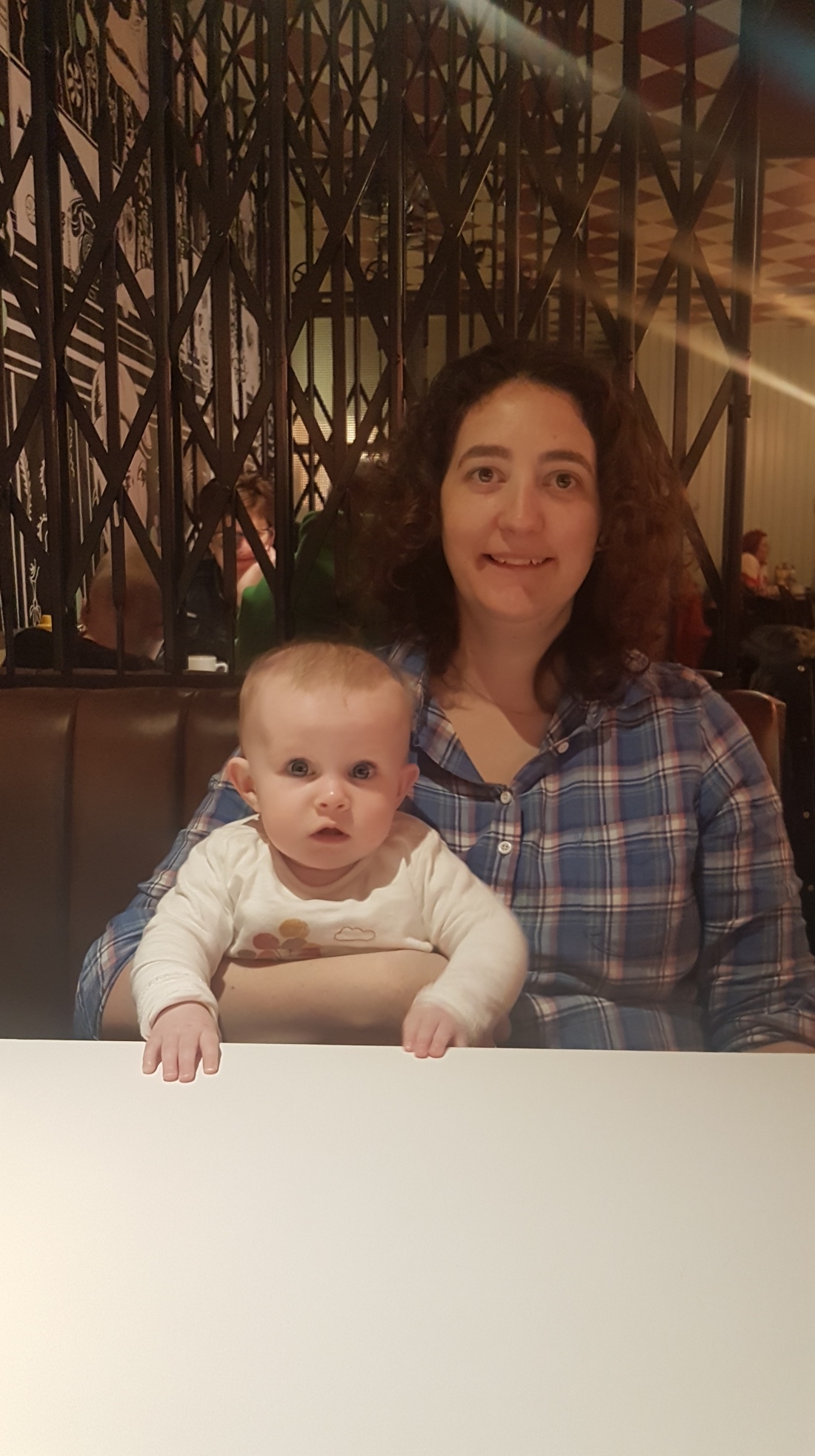 I am a first time Mom since July 18, and I want to share everything I have learned so far with all future & current first time mommies. View all posts by isobel15